I was first introduced to sailing at scout camp. I wish I could actually find a picture of the strange little boats that our scout camp owned. They where strange little boats that where donated to the camp. Working on the aquatics staff at the camp I figured out how to put them together and sail them in order to offer a sailing merit badge. After several years of teaching swimming, lifesaving and canoeing; sailing stuck with me. 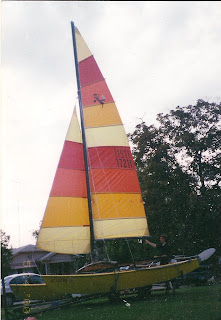 During my third year of college I decided that it was time for me to get a sailboat of my own. I purchased a Hobie 16 for about a thousand dollars, which I borrowed from my parents. Since then I have owned 4 different Hobiecat's, a 16, 14, 17 and lastly a Getaway.

My first Hobiecat was a Hobie 16 with a jib. I assume all 16's come with a Jib? In any case mine had one. It was bright yellow, with a beautiful rainbow colored sail. I set it up for the first time in the yard of a house we rented in South Provo, which has since been torn down.  When I bought my first Hobie 16 I was newly married with no kids, so I thought the 16 seemed like a great choice.  I learned quickly that my wife was more keen on riding on a boat rather then helping to sail one.

I sold the H16 after a season or two, opting for a Hobie 14. My thinking was that the 14 would be something I could handle easily solo. I was right, and the 14 is still my favorite boat for solo sailing. The H14 is fast, easy to sail and very tough. It flips easy and rights easy. If I could have two boats, and a magic wand, I would have a H14 today. 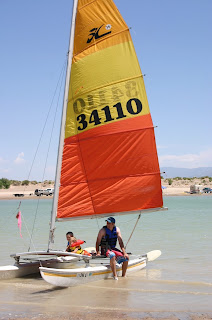 There are a few short comings of my H14. First it didn't have a Jib. This made tacking tricky, the Jib pulls acts like a wind vain when tacking and helps pull the boat through the wind. Catamarans don't tack as quickly as  keel boats. Jib kits are easy to install on H14, but I didn't install one at the time because it made for simple sailing.  My biggest complaint for the 14 was that it simply couldn't hold enough people. Sailing with two adults on the 14 was pushing its capacity. We took it out with as many as 4 adults and the 14 was sluggish and cramped.

Looking to remedy this problem I found a Hobie 17 for sale and I picked it up for just 400 bucks. It came with a nice trailer and sail box. After a few fiberglass repairs, I had it on the lake. I really like the H17 sleek design. Sailing it solo I discovered it to be very fast less inclined to flip then my 14. My H17 also didn't have a Jib and tacking on the H17 was more difficult then the 14. Unlike the H16 and H14, which are all but identical, the H17 is completely different design. 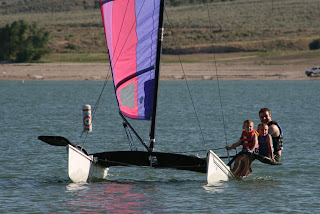 First the H17 has dagger boards to improve its windward capability, a feature I deplored. The dagger-boards where always getting stuck. When beaching the boat, sand would wedge between the hulls and the dagger boards causing them to bind.  The H17 was not much more buoyant then the H14. It preformed great with one person, but now I had a family of 5 and we needed more space. The H17 hulls also leaked and I could never find the hole, I suspect the leak as caused by the holes that attached the wings. My favorite thing about the H17 was the wings. The wing seats made such a difference in the comfort of the boat.

After owning 3 boats I had decided what I wanted in a catamaran. I wanted a boat that had lots of capacity, easy to sail,  beach-able with wings.  So the Getaway seemed like the perfect boat. I looked for sometime for a used Hobie Getaway. I figure either Hobie doesn't sell alot of Getaways or used boats go pretty quickly.  I eventually decided to pony up the dough and get a new boat. 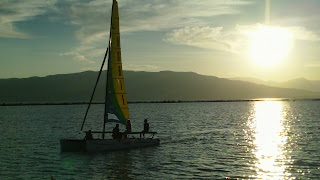 The getaway is perfect for a family boat.. It has enough buoyancy to handle 4+ adults easily. It has no boom which is great when you are sailing with kids. The front trampoline is fun and comfy. The wings fold in and much easier to use then the wings on the H17.  The Getaway is very stable, easy to sail and tacks well.  You can beach it with no concern about damaging hulls.


Over all each of these boats is a great choice for someone looking to get into sailing.