Crystal clear water, palm trees, and sandy beaches are becoming a blur. In the past month, we have seen so many beautiful places it's hard to remember one from another. A couple of easy days of sailing southeast of the Tuamotus Archipelago brought us to the Society Islands. We landed at Tahiti, it's towering volcanic mountains reaching the clouds. Each island in the Society archipelago is ringed by a coral reef. The Society Islands are sort of like combining the mountains islands of the Marquises with pristine lagoons of the Tuamotu. 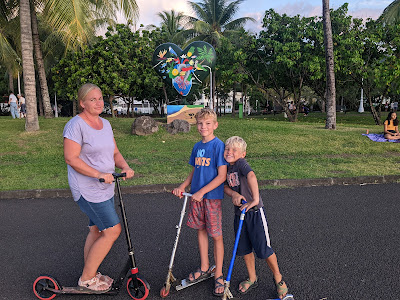 We visited four atolls, Raroia, Makemo, Tahanea, and Fakarava. Each is very similar and yet entirely different. Regarding sailing, cursing between the Tuamotus has been my favorite part of the trip. The sail to each atoll was quite pleasant; perhaps we got lucky. The four short passages we made were described by a consistent light wind and small seas.

At Makemo, we were able to get some provisions, including some fresh fruits, vegetables, and eggs. There are 2 good stores or Magazines here, good snorkeling and a sandy beach. Navigating the danger island became too real for us as we made our way to the southeast corner of the atoll. A squall blew in, and just as our lookout ducked into the cabin to stay dry, we struck a small underwater reef. It was perhaps 10 feet wide, quite challenging to see if you're looking for it, and we were not. The tiny dot did show up on our satellite imagery, but I was just not looking carefully at the screen. The boat slid onto the reef, leaving us stuck until high tide. It could have ended up much worse; however, luck was on our side. The boat was none the worse for wear, and we gained a bit of wisdom from experience.

Tahanea was the smallest atoll we visited and the favorite for me. The southeast corner offered a protected shallow anchorage. It was protected by a palm forest and sandy beach. The kids loved this stop. All the kids in the group we had been sailing with decided to camp on the beach. Something like 21 hammocks was strung up in the palms. The older kids constructed a huge bonfire. Kids ages 18 to 8 ate foil dinners and listened to music while the adults enjoyed potluck tacos on one of the larger boats. Tahanea is not occupied, so there is no village and no locals to visit. We did see a quite adventurous national geographic cruise boat making its way through the Tuomotes to the Marquises. 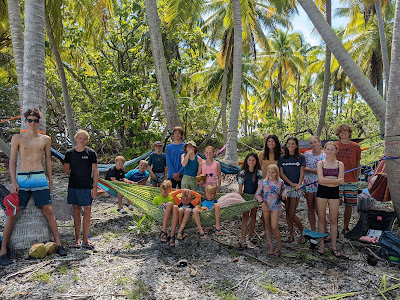 Fakarava also offered a lovely beach along the south of each corner. A small beachfront restaurant was never opened alongside it was a slackline park that made it a popular place among the older kids. Fakarava was also home to the kid's beach Olympics organized by one of the dads. The kids played coconut toss, had paddle board races, tossed Frisbees, and had an epic tug of war, littles against the bigs. On Fakarava, we rafted 6 catamarans together and created our own floating city. It may have been the peak of the kid boat flotilla. Kids bounced from boat-to-boat swimming, snorkeling, and playing games. 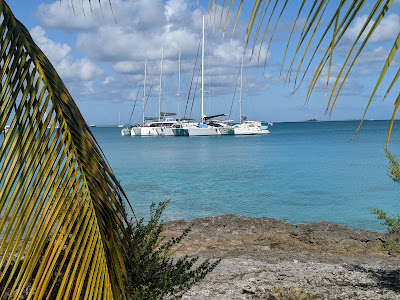 The north of Fakarava is home to a bustling metropolis of something like 1800 people. It sports a sharp little store and fuel dock, a few little stores in the village, a pearl farm, and a cultivated beach resort that doesn't seem to mind being crashed by a bunch of families with kids if they buy overpriced hamburgers and sodas. On our last night in Fakarava, we anchored near the northern pass near a dandy patch of coral that offered some of the best snorkeling we had so far. The reef was teeming with thousands of colorful fish, sharks, eels, and coral. Our big kids go on their first dive after a crash course in introductory diving. I was proud of each of them. I enjoyed watching them learn new skills and having such an incredible adventure. 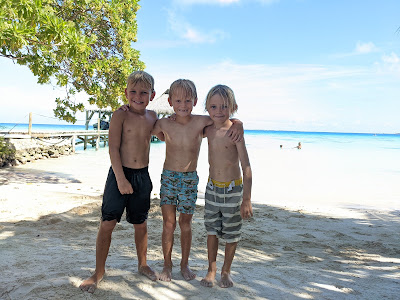 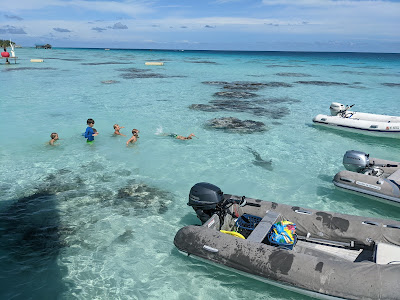 After several weeks of cursing with the kid boats, we decided to split from the group and head to Tahiti sooner than the rest of the group. Our port transmission was giving us trouble, and our refrigerator had died.

The two-day passage to Tahiti was no sweat. Molly spotted the Island 12 miles out in the early morning on her watch, mistaking it on the radar for a big squall. She woke me up, asking for directions. "That isn't a storm. That is Tahiti." I replied. We arrived just as the sun came up with the misty mountains of Tahiti, which were veiled in clouds. We lucked out as we pulled into the first-come, first server marina; we got a call from one of the kid boats which had left our group a week earlier. There was an open slip that fit our boat. 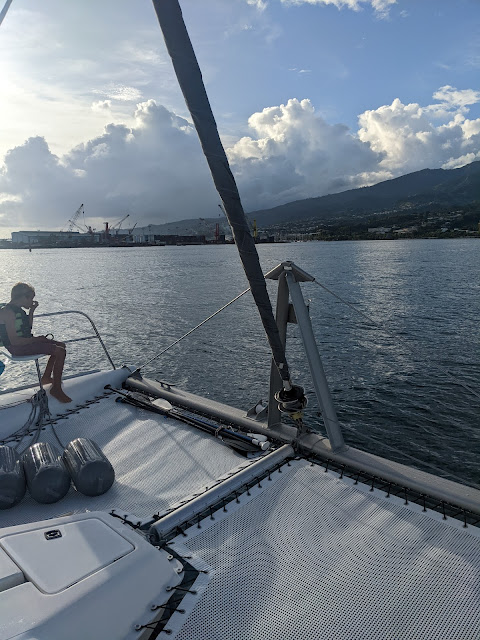 The following week would be all boat work and provisioning. Papeete is a dense little city where you can get whatever provisions you need if you want to pay for them. We visited almost every grocery store in town and spent most of our monthly budget. I pulled out the port gearbox and tore it apart on our cabin table, giving it a complete rebuild. We could not repair our refrigerator, but we found a DC portable freezer and wired up a new 12 plug for it in the cabin. We cleaned the boat inside and out, picked up a new crew from the airport, and took a sightseeing tour around the island. We rented a car, hiked waterfalls, explored Tahitian holy sites, ate chow mien sandwiches, and ducked into tropical grottos. 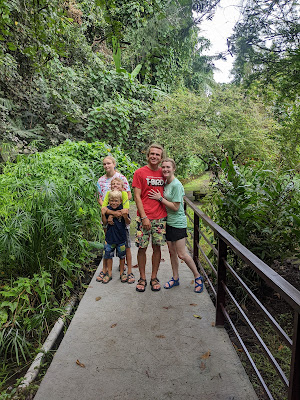 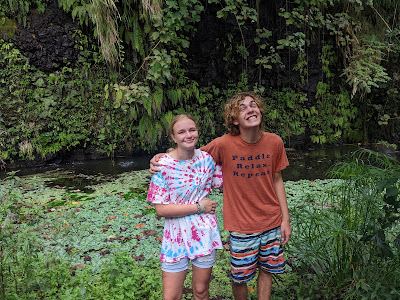 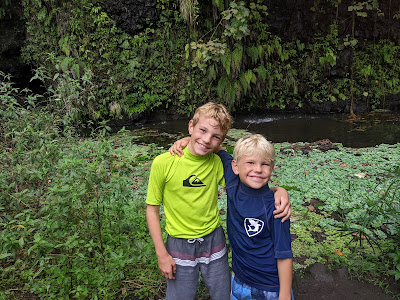 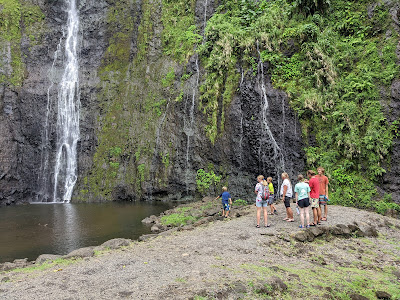 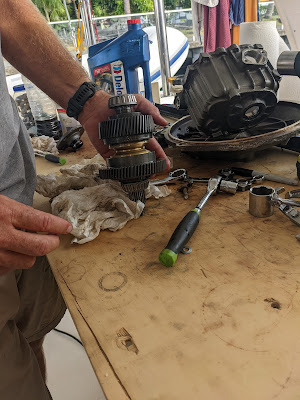