Sailing from San Diego to Cabo

With gusts blowing into the 30s and the boat surfing down waves at 14.5 knots, we decided rather late to put the second reef into the mainsail. Sailing this 43-foot catamaran is a departure from my usual fare. Our Hobie 21 may have briefly seen winds in the high 20s, but often we saw speeds well past 14kts. Sailing 14 knots on a beach cat is a thrill, but doing it on a 43-foot catamaran made my wife and me uneasy.

Turning the boat into the colossal swell meant starting up the diesel engines. The two 40 horsepower diesel roared to life, and we headed upwind. We battled the swell and wind, clipped into our harnesses, and set a sloppy reef as the sunset. THE ENGINES DIDN'T SOUND RIGHT when I climbed back into the cabin. I checked over the side, and no water was flowing out of the cooling ports. I quickly shut them down. With the reef 2nd reef in the mainsail and preventers set, we run the boat at manageable six knots. Our objective was to hide behind the lea of Cedros Island, but the wind kept right on blowing, and now we had lost both our diesel engines. In the rough seas, the water impellers failed to prime and had burned up running dry.   I dug out my spares and, with the wrench in hand, dove into the engine compartment to replace them. This is usually a straightforward task, but my nerves were shot, and the sea state made working below miserable.

Eventually, we closed the distance to the island's lee and took shelter from the sea and wind. Early the following day, we crept into turtle bay for a reprieve. Turtle bay was an unscheduled stop, but sailing and schedules don't mix. We found the quiet anchorage to be well protected and peaceful. In the morning, A young Mexican in a panga greeted us, hoping to sell us diesel fuel.

The little fishing village at Turtle bay is not much to speak of, a rickety old dock held together by bird poop and paint, a gas station, and a tiny tienda surrounded by crumbling buildings and stray dogs.

The following day, we picked up the hook and set sail for Magdalena Bay. The next few days were perfect light wind sailing mixed with a few hours of motoring. We few our spinnaker as often as we could, sailing between 6 and 8 knots, but at night, we set a reef before sunset, as is our custom, and poked along between 4 and 6 knots.

A Thick fog arrived with us at Magdalena Bay. Mag Bay was our scheduled stop, but the fog combined with a following low-pressure system persuaded us to push on to Cabo. So we headed out, hoping to put some mile between us and the rugged coastline for another 24-hour sail.

In the final days of this cruise, we saw mega pods of dolphins, whales, perfect winds filling our beautiful blue spinnaker. Water temperatures slowly rose from the chilly 59-degree of Ensenada to an inviting 74 degrees. The family was finally settling into a rhythm of reading, listening to audiobooks, and playing games, when the iconic rocks formations and hotels of the Cabo San Lucas landscape appeared off our port bow. 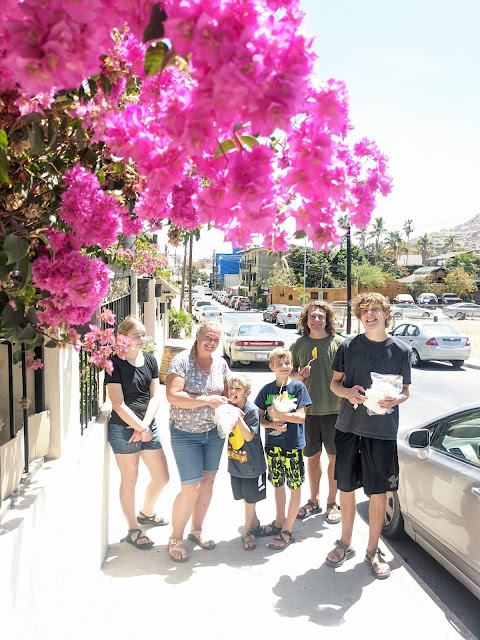