We spend two nights at Daniels bay in Nuku Hiva

We spend two nights at Daniels bay in Nuku Hiva. Daniels bay is only called by that name by the cruisers; on the map, it is called Anse Hakatea. When we arrived at Daniels bay, it was crowded with some 10 or so other boats. Crowded anchorages were the order of the day for Nuku Hiva; fortunately, after the first night, almost all of the boats cleared out of Daniels bay, leaving it just for us.

The water in Nuku Hiva isn’t that impressive; it's somewhat silty and dark. The landscape of Nuku Hiva is stunning. Towering cliff walls and deep tropical jungles make for fantastic hiking and exploration.

We anchored in 20 feet of water and took our dinghy to land at the beach. This was the only beach landing we made at Nuku Hiva. The beach at Daniels bay is one of the better beaches in Nuku Hiva, mostly black sand beaches; the kids played in the mild surf and waves.

On our first day at Daniels bay, we hiked to the supposed highest waterfall in the Marquis. This was a grueling hike for our little guys and a challenging trek for the rest of us. I think the round trip hike took us around 6 hours, and the cascade at the end of the walk failed to fall as it hadn’t rained on canyons for a few days. The towering volcanic canyons that surrounded us at the end of the hike were otherworldly, and even without the cascade, it was worth the trip. 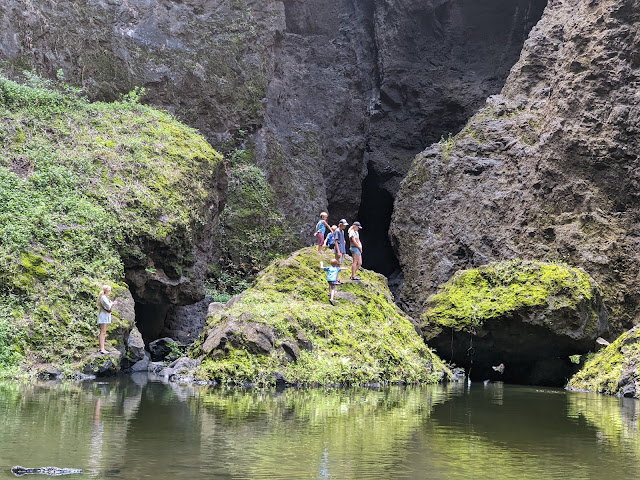 The trail up the canyon is an ancient Marquesan Road, lined with the ruins of native villages long abandoned. The road was made of substantial volcano stones perfectly aligned and filled with smaller rocks, and occasionally it was nicely paved. Still, often the road was uneven and difficult to walk. A carved statue pokes out from the vines and leaves, and you feel like you are smack in the first scene of Indiana Jones and the Raiders of the Lost Arch. An archaeologist's dream is that terraces, foundations of ancient dwellings, and wells are strewn on either side of the road for miles on end. Only one village is still occupied with less the 20 or so residents who make their living making dinner for weary hikers on their way back from the trek in the jungle.

After our hike, we had dinner prepared for us by the local Marcacian family. They baked us breadfruit, prepared like French fries, and pork roasted in coconut milk with sweet bananas. Freshly squeezed pompelmose juice, a sort of tropical grapefruit. The dinner was simple, yet tasty, and for about 10 dollars the US ahead, considering the family sent you on your way with bags of bananas and pompelmose. It was nice to contribute to the local economy and experience regional cuisines. 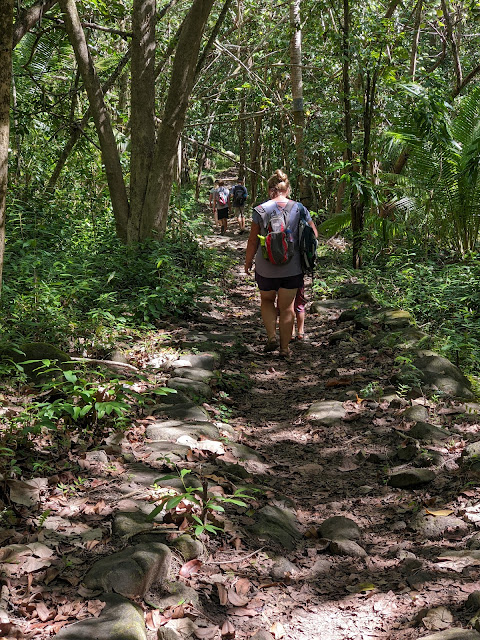 After most boats left Daniels bay, those who remained met up on the beach for a bonfire made by a local whose name I could not pronounce and cannot remember. We shared smores and Cokes with him, and he gave us sweet bananas.