The water here is as clear turquoise blue as I have ever seen. We dropped the dinghy anchor in sand a few meters away from the coral head, downed our snorkel gear, and grabbed our Hawaiian fishing sling. Ben Etan and our new friend Andy swam the coral head searching for Grouper while Lincoln and Andy’s son Gram watched over the dinghy.

Grouper are skittish and stupid bony fish who think they cannot be seen if they stay very still. They seem to like the dark cavities beneath the coral heads, and each head is home to a few. Andy had a few proper spear guns and fishing weights; our clan came armed with only a Hawaiian fishing spear and our Costco discount snorkel gear, which is good enough for us; the grouper cannot tell the difference.

The coral in the lagoon at Raroia is alive and teaming with life. It is like swimming in an aquarium at a doctor’s office. Fish of every color, coral, eels, octopus, sea cucumbers, and sharks. The sand at the bottom of the atoll is white, made up of dead coral. The depth of the Raroia atoll is either 50 feet or nothing, every few hundred yards, ahead of coral, 20 to 50 feet wide rises from the atoll floor, building a lovely home for all manner of sea life. The atoll itself is maybe 8 miles across and 50 miles long. It's home to a few hundred folks who don't do much of anything as far as I can tell. We explored the atoll by dinghy and found a small village with a tiny store and a few abandoned pearl farms.

Our spear hunters scared up a grouper pretty quickly after jumping into the water, and when it darted from its hiding place to take cover from one of the spears, It made the mistake of hiding in front of my Hawaiian sling. A quick release of the bungee, and it was all over. I hustled over the dinghy and dropped lunch in the bucket. The dinghy was encircled with blacktip reef sharks looking for a handout a few seconds later. The reef sharks were harmless and curious, but they became more interested in our party when the grouper blood spilled. And that’s how it it was for the following few coral heads. Ethan bagged the next grouper, and we all made a b-line to the dinghy when the sharks smelled our catch. We would then be forced to abandon our hunting round and start over at a coral head with no sharks. We bagged 4 giant grouper. Later that evening, we joined the crew from Aqua Fox for fish tacos on their spacious 50-foot catamaran. 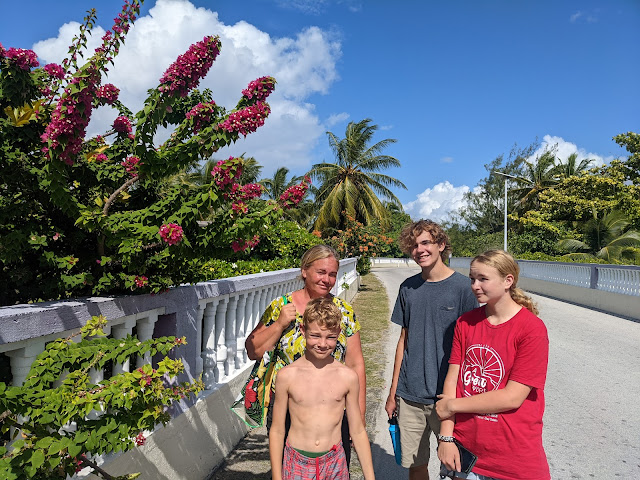 It took us 3 days to sail to the Tuamotus from Nuku Hiva in the Marquasion Islands. Compared to the deep jungles and towering volcanic landscape of the Marquis, the Tuomotues are unassuming. Still, they have a lot to offer, clear water, sandy beaches, and peaceful, uncrowded anchorages.

We only spend a few days at Raroia, then off to the next stop. Without any connectivity and few provisions, we need to stop with the internet, food, and fuel.